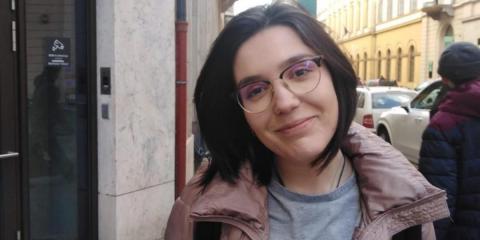 Anita Lekova received an MA (Honors) in Russian Studies and Politics from the University of Edinburgh. Her dissertation analyzed visual culture and the portrayal of Soviet women in the 1920s and 1930s. She continues to focus on the topic of cultural awareness at CEU and for her thesis, she is analyzing how gender is understood within the Bulgarian context. Lekova also recently worked on ERASMUS+ project development as a corporate social responsibility intern.

We spoke to her on the occasion of her 2020 Presidential Scholar Award. This is an edited interview conducted on October 20, 2020.

What does this honor mean for you?

Getting this award communicated to me that the research that I'm doing is important and valued. This support is a huge motivating factor because as I'm applying to PhD programs, this award shows that my project is distinct in the way its presented, and as long as I believe in myself, there will be other people who are receptive to the work.

What was your route to CEU?

I really connected with the CEU mission because I moved to the U.S. from Bulgaria when I was two. Therefore, because I grew up in this in-between space, finding a university that is both American and also focuses on post-socialist countries was a pretty big motivating factor for studying here. CEU is very aligned with the type of research I want to do in gender studies and I was lucky enough to know somebody who went to CEU who shared her very positive experience with me.

What do you think is the most important factor in being selected for this scholarship?

I think the number one thing is to believe in yourself. I genuinely think that part of the reason I received this award is because I truly stand by what I wrote about the research I'm doing and why it makes an impact on not only a community level, but hopefully more widely. Surrounding yourself with people who also believe in you is another factor, for example it was the encouragement of my excellent supervisor, Hadley Renkin, who persuaded me to apply. I believe these two factors are relevant whether it's this award or other positions.

What was the response by those around you when you shared the news of your award?

The most important response was from my parents because they're really far away and given the Covid-19 situation, traveling to the U.S. is not so realistic right now while I do fieldwork in Bulgaria. Moments like these bring us together despite that distance and also help them understand what I'm working toward. In Bulgaria gender is understood in a completely different way so also getting positive feedback from my family in the place of research has been great. The award also brings recognition to a Bulgarian subject that is not focused on a communist past but rather something that's contemporary. I'm trying to really understand the way that our culture works and how we transfer political ideologies and identity information in different contexts to hopefully build on human rights.

With ethnographic research, you blur the lines between where your life stops and where the research starts. Figuring out how to deal with that is very interesting right now because this past summer Bulgaria had a lot of protests against the government. Being there while the protests are happening shaped my interview questions as they relate to nationalism. As a researcher, we're never fully removed from our subject, and history is constantly being made, so as the research develops you have to think of creative ways to connect that and be innovative in what you use. The research lives very much all around us directly.

The Presidential Scholars Fund was established by CEU Rector Michael Ignatieff and his wife Zsuzsanna Zsohar. It supports four Presidential Graduate Research Awards for exceptional Master's and Doctoral students whose research shows promise for the next generation. The Fund also awards two scholarships per year to incoming bachelor's students demonstrating exceptional academic credentials and leadership promise. Bringing the graduate and undergraduate scholars together, the Rector hosts an annual dinner for the Scholars and meets with them regularly throughout the year.